So ever since signing up to Instagram recently, I’ve been trying to post a new piece of art or cartoon every day (or as close as possible), to exercise my topical muscles a bit.

In the rush of it all I’ve not had the chance to update this site, so here are my most recent cartoons in one lump sum.

Cartoons below – hope you enjoy them.

Another addition to my unintentional Brexit series, with more than a little inspiration from Marcel Gotlib. 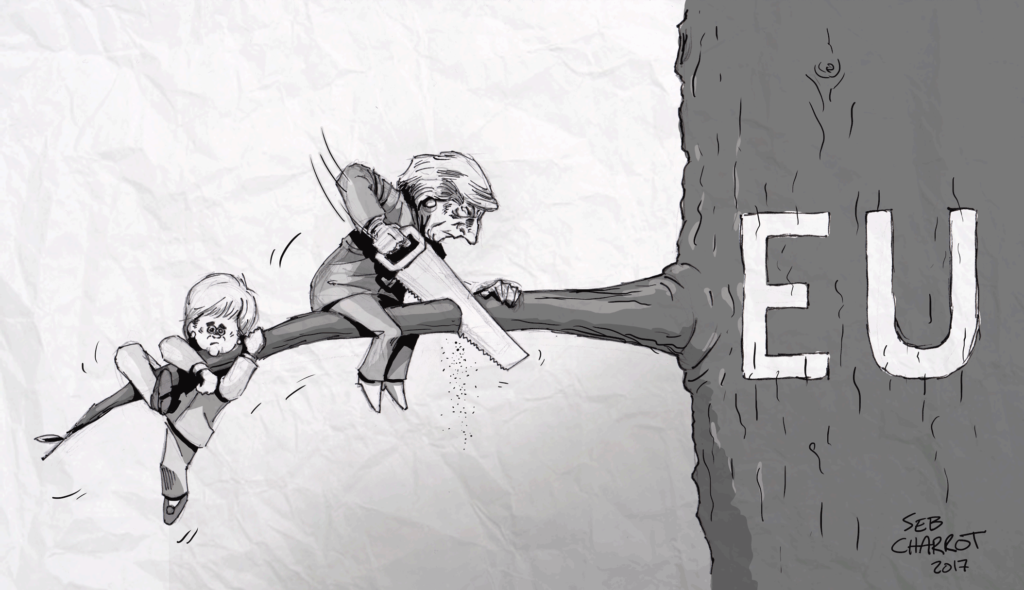 [This was originally a contribution to the satirical news site www.britishbullsh.it. Click here for more of my articles.]

While speaking at a trade union event in his constituency of North Islington, supporters were left shocked and spittled when one of speaker Jeremy Corbyn’s teeth loosened and was accidentally propelled into the unsuspecting crowd.

This is the third such dental mishap since taking power in September last year, leading many to question his continued refusal to use the sugar-free chewing gum Trident.

Corbyn has been a vocal critic of the polymer masticant, claiming it to be ineffective and instead proposing to invest in greener forms of rechewable energy. However this latest incident has caused factions within the Labour party to cast doubts over the direction of his leadership.

“This is another example of Corbyn’s toothless politics,” claimed a senior Labour official. “We knew he had a bleeding heart – but bleeding gums is another thing entirely”

Meanwhile the Conservative party were quick to pounce on the episode, with Prime Minister David Cameron referring to the Labour leader as a “Halitosis sympathiser”.

Speaking to the press the morning after the incident, Corbyn opened doors to a possible softening of his hard-line stance, by raising the possibility of continuing to fund the Trident programme to manufacture empty gum packets.

This latest controversy follows on the back of revelations last October that Corbyn’s views on the monarchy had led him to reject a dental crown.