To bed, but not to sleep

At some point in the last 10 years, I’ve managed to convince myself that I knew a quote from Hamlet that wasn’t in fact from Hamlet. The quote is:

My (false) memory tells me this was part of some Hamlet soliloquy referring to insomnia caused by concerns of dead dads and murderous uncles.

For close to a decade it’s been in my brain’s bank of Facts I Know, ready to be deployed at the appropriate time. That time came tonight, and as soon as it passed my lips I began to doubt myself.

Surely a quick Google search would corroborate my assertion? 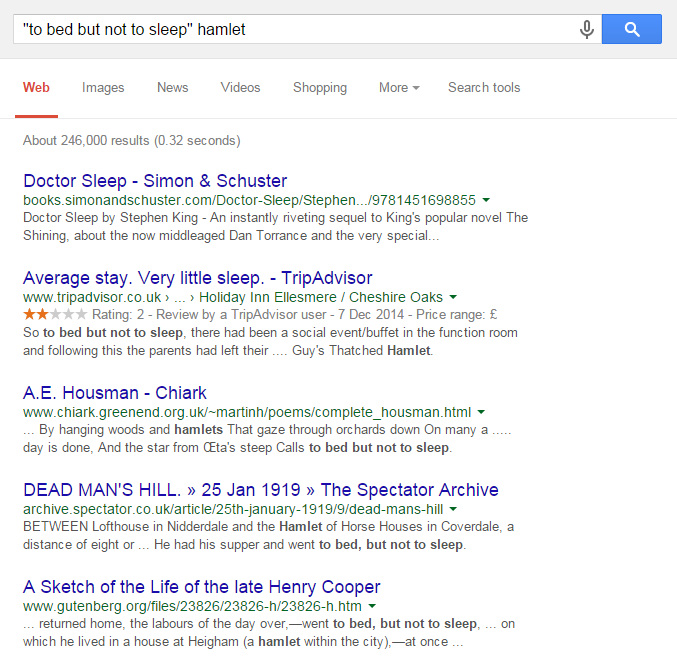 Hmm… no obvious hits. But c’mon it’s a famous quote, right? Let’s cut to the chase and just search within the text of the play itself.

No dice. So I have to come to terms with the fact that the quote is not – and has never been – in the play “Hamlet”. Worse yet, no variation of the phrase exists in any of Shakespeare’s plays. I can only imagine I attributed the quote to old Will because of its similarity to the famous line “to sleep, perchance to dream”.

But if so, where does the “to bed” quote come from?

Searching for “to bed but not to sleep” isn’t very useful – it seems that a million and one people have used the phrase at some point or other. The number one hit for the exact phrase (in quotes) is a TripAdvisor review. 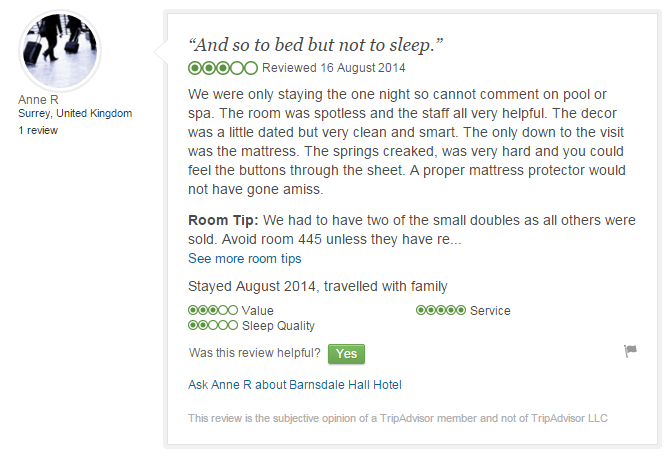 No citation for the quote (thanks Ann R), but here at least we have a slight variation on my initial quote – this one begins with “And so”, which sounds more complete, and therefore more promising. What does a Google search for that give us?

Well, apparently those are lyrics from David Cassidy’s Where is the Morning – a song I’m convinced I’d never heard before today.

Let’s think this over – the phrase seems to have been used a number of times. Who coined it? Can I trace this back to its nexus? This has become a search for the genesis of a phrase.

Onto Google NGram, a project which allows you to search for phrases across millions of digitised books, and see how their use changed over time.

OK I don’t really know what that tells us. At its peak, 0.00001% of all Google’s digitised books for a certain year contain the phrase “but not to sleep” (the full quote is too long for NGram). Google has digitised about 30 million books, so that means in the late 1700s, 300 books were written containing the phrase. At least the NGram gives me a rough time period to search for – nothing appears prior to 1700, although that could just be how far back the archives go.

So what if I search directly in Google Books?

Aha! The oldest book Google has digitised containing the phrase “to bed, but not to sleep”. The knowledge is like an oasis in the desert. Let us crawl to the water’s edge, plunge in our heads and drink deeply.

The Strange Adventures of the Count of Vinevil and his Family is a book by Penelope Aubin, written in 1721. Personally I think the subtitle could have left a little more mystery but it’s certainly descriptive: 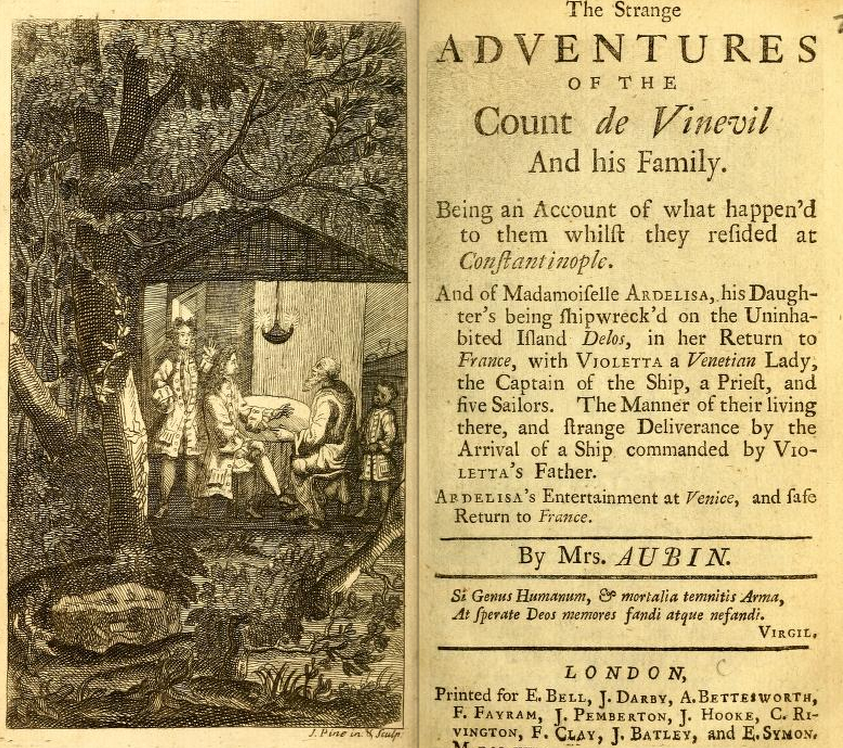 And the excerpt itself, courtesy of Google:

Don’t get me wrong, Penelope seems to have written the oldest recorded instance of the phrase, but other notable authors were hot on her heels, including:

And that, as far as I’m concerned, is as satisfying an ending as I think I’m entitled to tonight. Were it not close to 2am I might try to delve deeper into the etymology of the phrase, any tie-ins to other languages, how it spread and who spread it… I may even have tried to find out exactly where I personally had come across the phrase in the first place.

But it’s late, and I’m heading to bed. And to sleep.