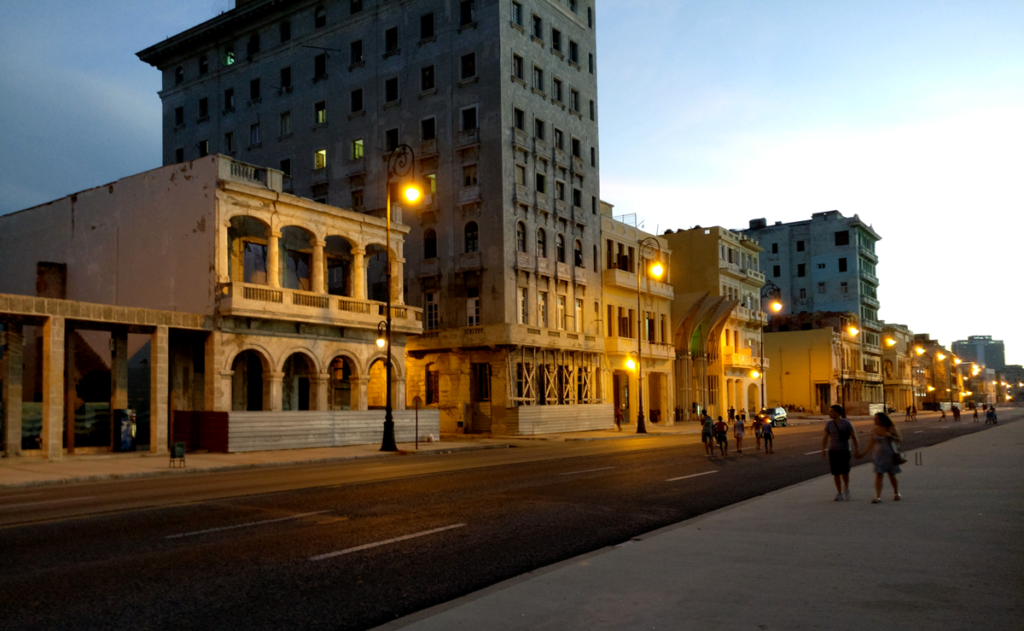 My girlfriend and I recently travelled to the incredible city of Havana for 10 days – an experience I would highly recommend.

Before travelling I did a fair bit of research and found some travel tips and suggestions (I’ll provide links to the most useful of these at the end of this post). While some tips came in handy, others were either inapplicable to Havana (versus the more rural areas of Cuba) or out of date (a lot has changed in Cuba, in a relatively short time).

So I thought I would make own additions to the raft of tips online. Tips that I wish I had read before heading out there.

Note: These tips were accurate as of August 2016, and only apply to Havana, so your mileage may vary.

This caused some substantial stress in the run-up to our holiday, as I had forgotten to check whether we needed VISAs to travel from the UK to Cuba. Some Googling will tell you various things, including how to apply for one for £35 per person, but forget all that. The facts are:

I’ve read that any Thomson Holidays flight also provides them – to be honest I wouldn’t be surprised if every airline did. In any case, it’s academic, since the Havana Airport website also states that you can buy one at the airport for 20 CUC.

PS – I read that you need to keep 25 CUC (per person) spare to pay an exit tax at the airport. As far as I can tell, this is poppycock: nobody charged us, we kept the money until we got on the plane, then realised we were left with an extra 50 CUC which we couldn’t exchange outside the country!

Money: A Tale of Two Currencies

Cuba uses 2 currencies: the CUC (pronounced “cook”), which is the tourist currency, and the CUP, the local peso. As a traveller you will almost certainly be only concerned with CUC.

Havana was, as far as I could tell, exclusively a cash-only economy. Not a single business or hotel took credit/debit cards.

All CUC notes have pictures of monuments on them, and are worth 25 times as much as the local peso, which have pictures of men on them – so always check the change you’re given. A great mnemonic to remember: “Monuments are 25 times bigger than men”.

The CUC is a closed currency, which means you can’t get it outside the country. You’re generally encouraged to therefore bring all your money as cash with you and exchange it once you land. This is what we did but I personally found it quite stressful to carry all that money around – and I never felt very secure relying on the hotel room safes.

There are various exchange places dotted around known as CADECAs (short for Casas de Cambio) – the exchange rate is set by the government (and tied to the US dollar) so if you go to any of these you know you’re getting the best deal. Other places, such as hotels, will exchange money but their commissions/rates are scandalous – don’t use a hotel unless you’re in dire need. The airport also has a cadeca out front, so I’d recommend using that to get some initial dough.

As it turns out there are a number of banks and ATMs scattered around Havana from which you could withdraw money. This isn’t without risk – as you’ll have to check beforehand that your card and bank are accepted (don’t take that for granted). If I was to visit again I might consider using an ATM and taking less hard cash with me.

We were travelling from Scotland, so it’s worth noting – Scottish pounds are not accepted. Thankfully we knew this beforehand, so took a combination of English pounds and Canadian dollars.

This is something I try to do whenever I travel somewhere new and I know I’ll be staying a while. It helps you get a sense of the place, gives you a day to ask questions of the local guide, and means you’re orientated for the rest of your trip. Highly, highly recommended.

We got a tour from Cuban Connections and our excellent guide was Anthony. He spent the whole day taking us around the centre, to the private harbours out west of Havana, to the forest areas at the back of Vedado where the Santeria worshippers sacrifice animals, to Old Havana, then home in a 50s convertible. Outstanding.

For years the only restaurants in Cuba were state-run, and the word on the street is that the food wasn’t great. However changes in 2010 have caused an explosion of privately-owned restaurants knowns as paladares, where the food is diverse and incredible.

You’ll find the best-rated ones on Tripadvisor but Chanchullero, near Centro, is an absolute must-visit. I would also highly recommend Nao, in Old Havana; and El Litoral, halfway between Vedado and Centro along the Malecon. The atmosphere at these places is warm, vibrant and homely. Nao and many other restaurants also allow bands to come in and play quick sets, then leave again, and they lend a great authenticity to the experience.

If I ever go back I’ll eschew any visits to state-run restaurants, which are OK but no more, draw up a list of paladares, and eat my way through it.

Incredibly, WiFi is fairly prevalent, not ridiculously slow, and moderately cheap, too.

You can identify most state-run WiFi networks as they’ll have “ETECSA” in the name – this is the telecommunications provider for Cuba. You can buy WiFi cards in most hotel lobbies, and they’ll work for any ETECSA WiFi network you find. These last an hour at a time (you can pause and resume) and generally cost 4 or 5 CUC (e.g $5 or £4). Hot tip though:

The cheapest WiFi cards are to be found at Hotel Ingleterra, across from Parque Central in the centre. Their cards cost 2CUC each.

The obvious export choice is to grab some fine Cuban cigars the share out upon your return. This is a fine idea since they are ridiculously cheap compared to prices back home.

Somewhat defying my expectations, the shop in Hotel Ingleterra had the best prices I could find for Romeo y Julieta.

By the way – make sure you check the export limits. When we left, we were allowed 50 cigars each, and 1.25L of alcohol. I’ve heard that unlabelled cigars aren’t looked upon well, so may not be worth the risk. Smoking unlabelled cigars while you’re in Havana, however… 🙂

For great prices on unlabelled cigars, try taking a tour of a cigar factory. Every factory worker gets 5 free cigars a day. After the tour, our guide took us into the cloakroom and sold us some cohibas for dirt cheap.

I’m loathe to include something so negative but this is an important point.

Do not go to the Buena Vista Social Club held at the Bar Taberna near Plaza Vieja.

The missus and I were keen to catch a music show, and on paper this should have been a great event: a multitude of Cuban legends, most of which were grammy winners, performing a show while you got a 3 course dinner and free cocktails. What I hadn’t deduced was that if these performers had won grammies, that would have been in the 50s. Sadly, the show was a tired affair – the place was half-empty, and the music was the same as we’d heard from a dozen street bands (who had been better). The food was the worst we had the misfortune of consuming: the saddest, rubberiest, cheapest and most inedible meal I’ve had in a long time.

We judiciously drank all our cocktails in an effort to kill any microbial or bacterial flora we may have consumed, but unfortunately that was in vain. The next day, and for the week after, Buena Vista left its mark not only in the memories of a mediocre night, but in the form of a syncopated rumba in our bowels. Trying to walk around Havana while remaining at all times within dashing distance of a toilet is tedious and not conducive to fun exploration.

Not many people speak English in Cuba. You will be very well served by the merest of Spanish. I listened to some helpful podcast series, and bought a phrase book (see Links section for links to both). I also downloaded an offline Spanish dictionary to my phone, which helped. The fact I already spoke French made Spanish a lot easier to grasp.

Simply the best travelling app – for finding activities and restaurants, or for navigating. I use this everywhere I go, it’s essential.

Wherever you can, grab another bottle. It’s way too easy to dehydrate, and it’s common to spend hours without coming across anywhere that looks like they sell water.

Saves some embarrassment once you get there. There are licensed taxis which cost a bit more – but you’ll find that random members of the public will become a taxi driver if they think you need one. Up to you if you feel comfortable with that. We had one occasion where things felt sketchy – 2 guys were in the car with us, took us on a detour to try to sell us cigars, then demanded more money than we’d agreed when we finally got to our destination.

Nobody is on time and nobody cares. Be prepared to wait hours in a queue for the smallest thing – because Cubans seem not to feel societal pressures to hurry up. We were the only flight landing into Havana, at midnight, and it took 90 minutes to get our luggage.

Said to be “the world’s longest sofa”, the Malecon is a low fortified wall which runs the entire Northern coast of Havana. It’s low enough to sit on – and hundreds of people do. Go for a stroll along here at sunset and watch dozens and dozens of Cubans chill quietly in singles and pairs. Kids play football on the road, one or two guys might be playing guitar, while others jump into the sea. It’s a beautiful experience and will be one of my lasting memories of Havana.

There are a million things to do and see in Havana and it would be daft of me to try to enumerate them all here (not least because I am no expert). Take some time to do your research beforehand, and learn some Spanish, and you’ll be in a great position.

Havana is an amazing place – it took us a few days to acclimate to the fact that it was so different, and so remote, like a time capsule frozen half a century ago.

It’s an exciting time for Cuba – relations with the U.S. are being normalised, the city of Havana is in restoration after it was named a Unesco Heritage Site, changes to the law mean that private businesses are booming. There’s a feeling of optimism. Visiting Havana was fantastic, and I would recommend it to anyone.