It’s a cliché for people to say their grans are strong. And maybe most of them really are. But my gran could beat up your gran. No question. Under the skin of those scrawny arms were iron pipes. Her legs were twin pistons. She could walk for days, and her will was made of steel. After getting the biopsy which eventually diagnosed her lung cancer, she walked a mile to the shops and back. She survived cancer and having two thirds of her lung removed. She lived through a war. There’s a reason you can’t spell “granite” without “gran”: she was old-school hardy.

Physical strength was never her problem.

My gran, Mary “May” McLeish, has always been a massive part of my life. By the time I was 5, my mum was raising my brother and I in France, and Gran would travel over from Scotland to look after us, even though she didn’t speak a word of French. At 6 years old I was her translator/enforcer. A story she used to love to tell was the time a waiter gave her Spanish Pesos for change, and ignoring her protests, I ran back into the café to confront him.

When we moved to Scotland she became a staple of our lives. In fact for the first 6 months she opened her home to us. A deeply religious woman, she accidentally imparted on me a lexicon of words with which I unintentionally blasphemed regularly. I remember the first time I – in my French/English accent, at 9 years old – said “Oh my God!”. She almost wet herself laughing. Then told me to never use the Lord’s name in vain.

I don’t remember ever being disappointed with visiting Gran, or having her come round to our house. Sometimes she would babysit us with my great-aunt Alice and the two would sit on the couch, telling stories, cackling with laughter (maybe Alice more than Gran), and drinking from a bottle in a brown paper bag which they euphemistically called their “medicine” to dissuade us from trying it. One night I convinced Gran to let me tape Die Hard to watch the next night – I set the VHS recorder to the right channel and time, and went to bed. The next night we all sat down to watch it together. I hit play, and up came some blurry-lensed channel 5 softcore “erotic thriller”. I’d accidentally (I promise) set the machine to tape the wrong channel. My brother and I stared confused (OK, entranced) but Gran leapt to action and switched it off, suggesting we see what other videos we had.

Once, on a visit to Gran’s when I was really young I told my mum I wished I had a different mum. Not out of malice but as one of those stupid, thoughtless, greedy things children sometimes say. The memory still haunts me. A few years later I told Gran how guilty I felt, and how I was worried she didn’t know how much I loved her. Her answer was simple and reassuring: “She knows”.

Gran died on Tuesday 5th of May, 2015. Four days ago. And all I hope is that she also knew how much I loved her.

And although she died on Tuesday, we started to lose her a long time ago. Having swatted away every one of life’s assaults, she eventually succumbed to the most insidious of all: an attack on her mind. She was diagnosed with Alzheimer’s 4 years ago, and her descent was relentless. The first time she failed to recognise me, I realised too late what I – what we all – had lost. I regret not having taken greater advantage of knowing this incredible woman while I still could. For years I had planned to record her life story, and now it’s lost. I regret not showing her how much she meant to me while she could still appreciate it. And since her diagnosis I regret not having visited more, to support her at her weakest.

I take some solace in having been with her for her final 24 hours – I’m glad I could give her that much. In her last days she was surrounded by generations of family: siblings, children, grandchildren. Even at her weakest she found a way to bring us all together. We reminisced, we contemplated, we joked, we cried. Her last days rolled back the years to the times when we would gather in her house for a weekend, as a family. Over the last 4 years we had lost that. Yet in her passing, she still managed to leave us a gift.

Rest in peace, Gran. I have so much more I want to say, but I know what you’d reply: “I know”. 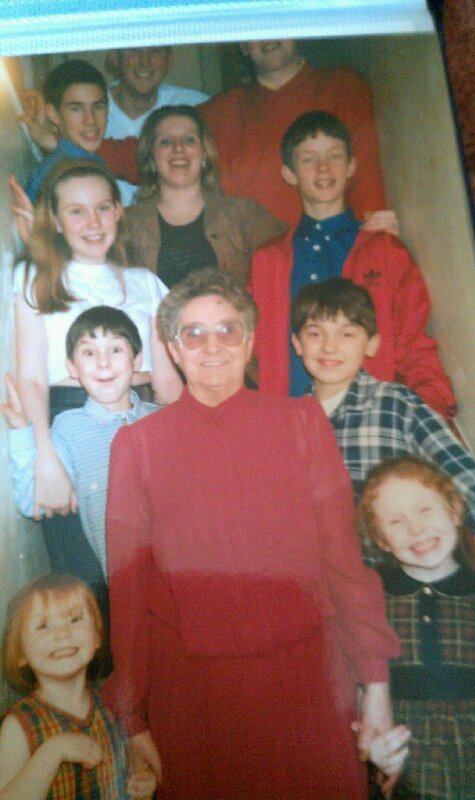 2 thoughts on “For Gran”